Most of the time in the UK, GPS directs me to National Cycle Routes, which you might end up in a muddy path full of thorns. Some routes are good though, but now I would rather avoid going there, I would navigate myself through “A” roads. You cannot ride on “M” road which are motorways. “A” or “B” roads are fine, but you have to be aware of British drivers who don’t give ways to cyclists!

In my GPS, the route from Leeds to Manchester is around 90km, but it passes around the hills on a longer way. I decided to take the risk and cycle across the hills which would shorten the distance into 70km. Leaving Leeds, I took A58 passing Drighlington, then turned to Brighouse and Elland. From Elland, I picked Rochdale Road heading to the 400m hill. When I arrived Ripponden, the whole town was decorated with “yellow bike sign” and bikes colored in yellow, don’t worry, they were not “ghost bikes” (which memorize for cyclists who were killed on the road). Getting closer to read the sign, it said “Ripponden welcomes Le Tour de France”!! A few months ago, Le Tour de France took this route up the mountain and roll down to Denshaw, first time even in England!

Going up the slope in a windy day was a big challenge, it was tough even using the lowest gear. My only desire at that moment was the downhill ahead. The view on top of the route was very nice, England is not short of farmland, there are plenty in the countryside!

From Denshaw it was a little bit going up, and then drop down to Oldham where you can take A62 directly to Manchester. I arrived at around 6pm, my host Josh was so friendly to cook me a meal, and we shared a lot about bicycle touring tips! He cycled 3 months from Lisbon to Copenhagen without a puncture, that is incredible! Thanks for your all your help and advice!

He then took me to a night walk in Manchester, the Canal, Town hall, and Old railway station. There is a big China town in Manchester!

I planned to ride 2 days from Manchester to Leicester. Just learned from Josh that there was a hurricane landed last night in the west coast of England, that’s why yesterday was so windy! Today the weather would be very unpredictable as well, be careful, that is his advice! I could totally see it, as here came the worst day of my trip!

Peak District National Park is right in between Manchester and Leicester, and there are high mountains again! Since I thought I had plenty of time, I didn’t choose the hilly road. When I was about to reach Stockport, there was something wrong with my tyres. I got down and checked, HOLY COW, both tyres were flat!! It must be those bloody thorns I rode across…I only had one spare tubes to put on the rear tyre, where the front one, I could just repair it and put it on again. The color of the sky turned really dark when I was fixing my bike on the road, and suddenly there were “hails” falling!! Yes, ice cubes were dropping from the sky!! After a while it came the rain. My whole body was shaking standing outside, got no choice but to knock on a door to see if I could hide inside one of the owner’s greenhouse. He was so nice to let me repair my tubes away from the wet and cold.

After putting both tyres back, I rode another 20km to Macclesfield. My fingers were freezing all the time even I wore gloves. And not very long later, the front tyre went FLAT again!! Almost 5pm, once I fix it, the sky was already dark… Therefore I just found a brick house bus stop, planned to stay a night there! Slowly I repaired the tube, but mentally I was defeated by all the troubles happened today. If it is going to be that COLD in the coming weeks, I couldn’t enjoy the ride at all!!

Cooked the pasta, set up the tent, stayed warm inside, I started to think about changing plans, maybe I should fly to Spain as soon as possible to escape the winter here! That night I had to take out the emergency aluminum blanket and put it inside the sleeping bag, it definitely worked out, didn’t wake up by the cold ever!

Second time camping inside a bus stop, such a good shelter to be found on the road!

Since I had to cover the distance I didn’t ride the day before, I woke up quite early, 7:30am the first bus came by but nobody said anything, snoozed for a while and headed off. Bought 2 spare tubes in Leek, I put one in the front tyre as it was a bit flat. Riding towards Ashbourne is a pleasure, many downhill! After a miserable day, I could slightly picking up the pace and rode quickly towards Leicester. I chose the route A511 rather than those smaller roads, the amount of traffic is medium. Finally I arrived Leicester at around 6pm. Almost riding 12 hours straight, I was exhausted. Thanks my Polish friend Greg who hosted me at his place in a Buddhist Center, and treated me a delicious meal! I felt so grateful about that! We just met a month ago in Holland on the way to UK on the ferry, and he fetched me from Harwich to Colchester, even helped me to find a place to pinch my tent! One day I will do the same to other fellow cyclists on the road, the spread such generous hospitality l

The next morning we had Full British breakfast together, the calories can definitely last me the whole day cycling! Greg got to work and we said farewell, hoping that we would meet again one day!! 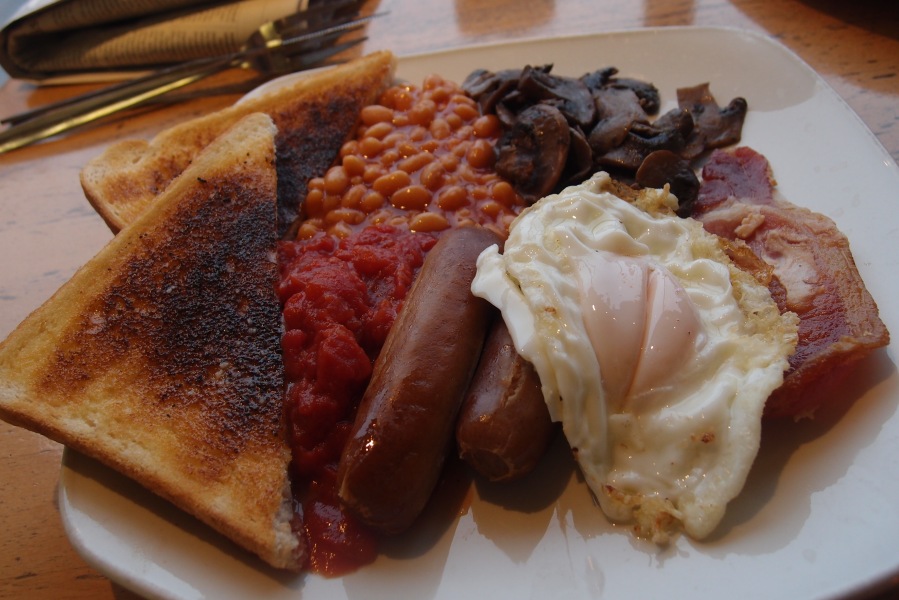