It was a bit hard to leave Aland, such a peaceful island but it was time to continue my next journey to the next country Sweden. However, part of me especially the memories and friendships are always there!

There are several ferry options that travel from Aland to Stockholm, of course the direct ones (Viking Line and Silja Line) are the most convenient but a bit expensive, they travel between Mariehamn and Stockholm. If you are in a tight budget like me, you can go to Eckero, the most western part of Aland, and take the ferry Eckero Linjen that takes you to Grisslehamn. If you are only with your backpack, the 4 Euros fare will include the bus journey to Stockholm as well. But sadly they don’t take bicycles so I have to pedal 120km all the way from Grisslehamn to Stockholm. 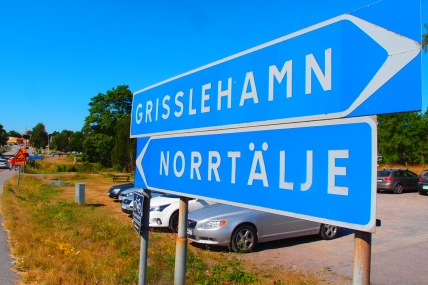 Along road 283, there are almost no bike lanes and the margin for cyclists to pedal on the road is TOO NARROW! There were 2 times I was almost hit by cars on the opposite lane which overtook their cars in front, it was scary!! And the amount of traffic is not light, constantly I was passed by trucks and cars that drove really close to me.

Crossing Vaddo and Almata, both lovely little towns right next to the river, I rode towards Norrtalje. The main street with lots of shops and cafes is really nice to hang out a bit.

Then another 70km towards Stockholm, that not many things to see on the way. The bike lane only appears when approaching Stockholm. I arrived late at night at my host’s place, thanks Mike that accepted my request in such short notice!

Stockholm is a capital built on many islands, with nice bridges and metro lines connecting them. In the brochure it said there are 85 museums in Stockholm, it is better to buy a Stockholm card (around 60 Euros for a day) that allows you to enter most of the museums for free. I didn’t intent to visit any museum, except the Nobel Museum so I just bought a ticket there.

I am going to stay a week in Stockholm, let’s see what interesting things I can share with you!