Learning from my last cycling trip in New Zealand, this time I don’t want to rush my trip in such hurry. I would rather stay 2-3 days in a city to discover how the local people live, to feel the atmosphere and try to involve myself into it. Although 2-3 days are still too short, at least better than 1 day and keep myself pedalling the next day. For those cities I feel really connected, I will surely come back again in the near future.

Near future could be next week! I have made a big adjustment to my trip, skipping the round-Baltic way, and will go to Aland instead, then carry on to Stockholm. That’s why I will go back to Turku next week to take the ferry. See you soon Turku!

From Turku to Hameenlinna, there is the oldest road in Finland called Hame Ox Road. It is pleasant to cycle the 160km in 2-3 days, you can see a lot of old wooden houses and super green farmland on the way. There are almost no cars to go this route after the highway 10 was built. But they still keep the sandy rocky road that I don’t like to bike on.

Stopping a night in Forssa, those big factories were switched into big shopping complexes. I camped next to a playground and suddenly there was an old lady from the opposite house came amd said hi. I thought she didn’t want me to camp there, but on the contrary, she told me if I needed anything, just let her know. Such a kind and sweet lady! I have got everything I needed so I didn’t bother her.

There were not more than 54km to Hameenlinna, I keep picking trashes on the way that could provide me food. Traveling makes me easier and easier to be satisfied. And I prove again that people don’t have to own or earn a big amount of money to be happy! Honestly, simple is equal to happy in my dictionary!

Every summer in Finland there are heaps of music, movie festival. I was lucky to watch some shows of Linna Jazz festival in Hameenlinna. Good music under perfect sunshine!

Of course I couldn’t miss the famous Hame Castle! The description of different castles in Finland will be “here”. There are free English tour every hour, don’t miss it if you visit there. 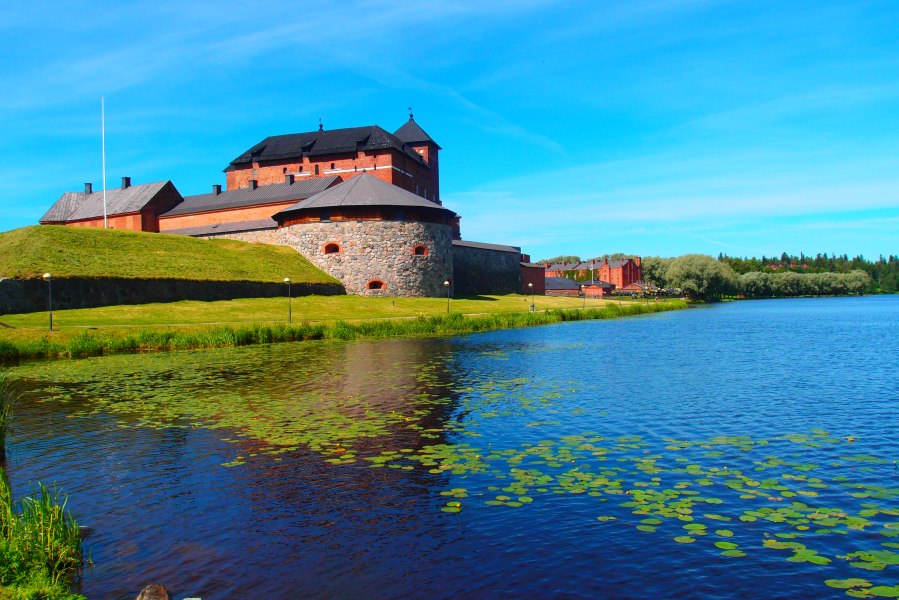 From Hameenlinna to Tampere is only 78km, I could do it in 6 hours. Therefore I started at 1pm after another taste of Jazz in the morning!

Tampere is situated between 2 big lakes. It was an industrial city in the 19th century. Big textile factories like Finlayson is now converted into museums, cafes and cinema due to the fact that cheap imported items (mainly from China) are much lower in cost than making there own. Almost all factories shut down after World War II, they all became “history”.

Tampere is famous for its traditional Finnish sauna! I am lucky to try both private and public ones 2 days in a roll. The 2 most must-try saunas are Rajaportin which is one of the oldest running sauna in Finland; and Kaupinoja which is next to the lake, in winter you can jump into the icy cold water as a challenge.

The last highlight of Tampere is its Moomin Valley museum which features Tove Jansson’s worldwide storybooks about adventures of Moomin and his friends. There are a few lines in the description caught my mind, it said Moomin was searching for a place called home, but finally he realised home could be anywhere when he felt love and care with his friends! It is exactly the way I am doing! The Earth is my home!!